The world over, the question of what the automation of work – the replacement of humans with autonomous robots, either physical machines or artificial intelligence – means looms, demanding an answer. How many jobs will disappear in the coming years due to this ‘digitalisation’ of production in both industry and services? What will be the consequences for production? For the quality of work? Relatively few studies have addressed this question so far. Among those that have, methodologies have been different and results contradictory.

The most pessimistic forecast has been made by Carl Frey and Michael Osborne. For 70 occupations out of the 903 listed in the US Department of Labor’s occupation database, chosen to be representative of the work that operators must perform, the authors asked experts on machine learning to assess whether automation of these tasks was possible based on two criteria. The first: is a task technically susceptible to eventual automation? The second: are the human abilities of manual dexterity, creative intelligence, negotiation, empathy, and so on indispensable for completing this task, or, alternatively, can it be performed by a machine?

The answers given by the experts for the tasks performed in 70 occupations were extrapolated to the 702 occupations considered by the study. The authors determined that, overall, 47 per cent of jobs are substitutable. In other words, their probability of computerisation is greater than 70 per cent. It is an overall figure and, as Graph 1 shows, the proportion of automatable jobs varies widely by industry. The machine-learning experts were not asked to give a precise timeframe for the substitution potential they were evaluating, and the authors of the study emphasise that the jobs in question may only become automatable over the next 10 or 20 years. 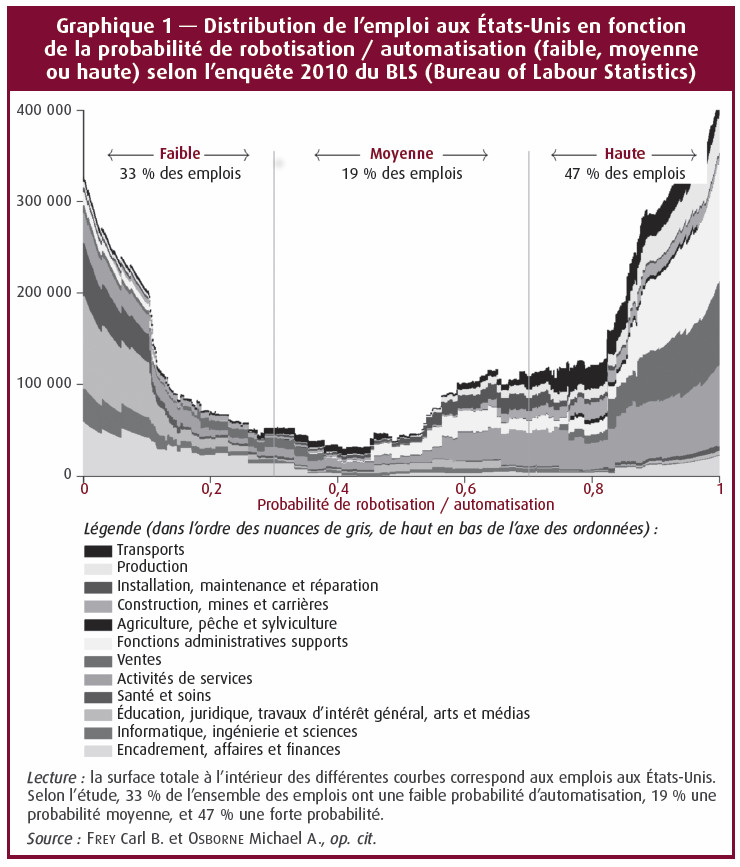 A study by the OECD, looking at the same period as Frey and Osborne’s paper, was somewhat more optimistic. It estimates that two to three times fewer jobs were substitutable, while still predicting that 25 per cent to 35 per cent of jobs will be affected to some degree. The study applied the methodology developed by Frey and Osborne to other OECD members countries, as well as the United States. However, the OECD analysis shows a significant difference in the number of jobs affected or destroyed for the United States compared to Frey and Osborne’s study. The authors of the OECD report say these differences can be explained by better accounting for the variability between jobs grouped in the same statistical category and, therefore, the tasks performed by workers. They therefore considered the task content of individual jobs, rather than the average task content of all jobs in each occupational category. The timeframe was the same as for Frey and Osborne’s study. It should also be noted that an analysis by McKinsey arrived at similar figures as Frey and Osborne (the disappearance of around 50 per cent of jobs), but considered a longer period. 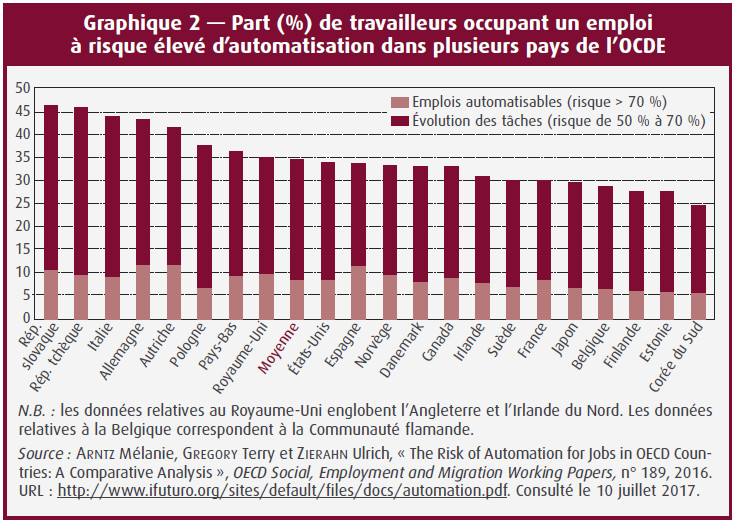 The results of these studies are at odds with the theory of the natural evolution of jobs. All the research conducted since the turn of the 20th century shows that every technological change has seen a corresponding natural evolution in the characteristics of jobs. Those destroyed by machines have been replaced by others directly or indirectly linked to the new needs created by technological change.

The massive growth in new information and communication technologies over the past two decades has not, for instance, had a clear effect. And it can be argued that this future revolution will be of an altogether different nature. Until now, new technologies have only complemented or assisted the work done by humans. But the impact of artificial intelligence may be entirely different and could usher in a new technological revolution. Rather than helping workers, it might replace them.

Although the debate is in its infancy, we can cite a further academic article by Daron Acemoglu and Pascual Restrepo that used real data rather than surveys or questionnaires. Based on data collected between 1990 and 2007, and controlling for variables such as imports, the offshoring of certain activities, the use of IT, employment demographics, and changes in industry, they determine that for every thousand workers, an extra robot results in the disappearance of six jobs and a 0.75 per cent reduction in wages. If employment created in other sectors (particularly outside of industry) is taken into account, the disappearance of jobs is limited to three for every thousand and the fall in income to 0.25 per cent. A net loss, nonetheless. The introduction of one robot for every thousand workers employed in industry is the rate seen in the United States between 1993 and 2007. The rate was faster in Europe over the same period, with the proportion of new robots installed 1.6 times greater.

The big question is: what effect will there be on service-sector jobs as they gradually introduce more automation technology?

Sharp increase in the control and intensification of work

The globalisation of the economy and the outsourcing of tasks and functions not considered core to a company’s business have been a key driver in the development of quality programmes in firms and, in the area of occupational health and safety, the adoption of safety management systems. This has resulted in a ‘proceduralisation’ of the way companies operate and less scope for workers to adapt their working practices.

At the same time, for reasons experts disagree on, growth rates for hourly productivity are at historically low levels since the start of the industrial revolution (particularly compared to the period following the Second World War). This is especially true for Western countries, whose results are given in Table 1. While the 2008 to 2009 financial crisis may have influenced this slowdown in productivity, the authors of the table indicate that it appears to be an underlying trend. 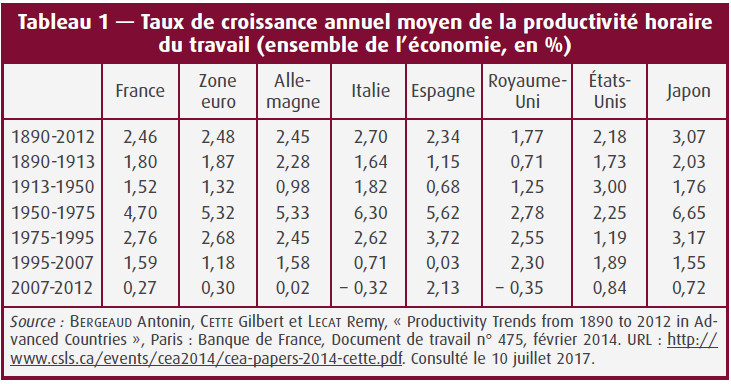 Further food for thought comes from David Graeber. Although it would clearly be wrong to reduce his vision to a single quotation, the following is instructive: « There appears to have been a profound shift, beginning in the 1970s, from investment in technologies associated with the possibility of alternative futures to investment technologies that furthered labour discipline and social control. » To this we can add the quip by Peter Thiel, the entrepreneur and investor heavily involved in new technology, which gives a damning verdict on capacity for innovation: « We wanted flying cars, instead we got 140 characters. » David Graeber’s observation alluding to labour discipline and social control can also be illustrated by Graph 3, which shows the organisational constraints felt by workers over a period that roughly begins after the Second World War and continues until the mid-2000s.

Figure 3 – Perceived ‘constraints’ experienced at work over the course of a career across generations (based on five criteria: working under pressure, working nights, lack of autonomy, bad atmosphere at work, and work-life balance) 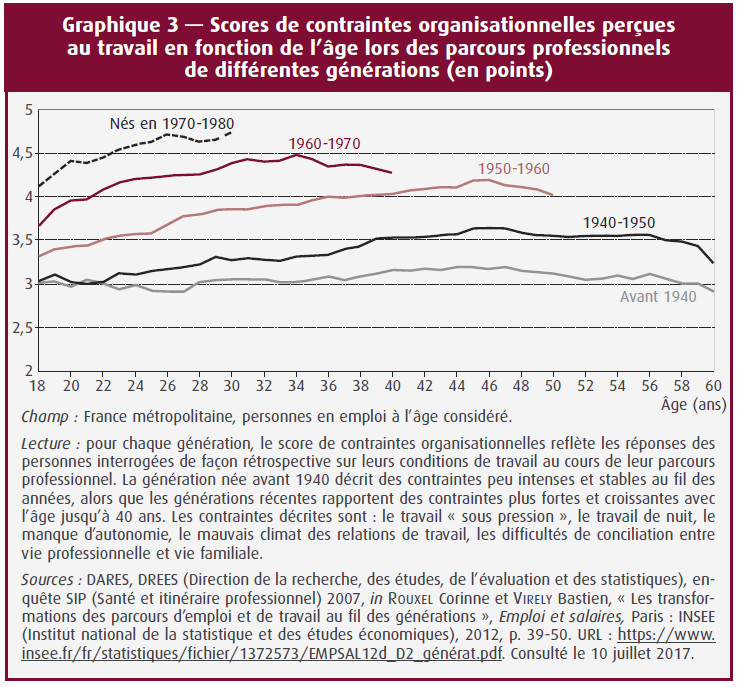 This increase in the control and intensification of work is not automatically synonymous with a deterioration in working conditions and a rise in occupational hazards. While automation can be a contributing factor, it can also reduce physical demands and repetitive tasks. It can also enhance tasks by introducing more variety or further empowering the worker, who may benefit from improved and accelerated access to information. However, over the same period, there was a steep rise in illness, including musculoskeletal disorders and psychosocial problems, identified as a consequence of these qualitative and quantitative changes to work.

Work intensification is linked to macroeconomic shifts that will be determining factors in the changes to come. One of these is heightened competition between different actors at a global level. Challenged by rivals in countries with cheaper labour, some companies have looked for ways of cutting costs, resorting to measures that have resulted in an intensification of work. This has taken place in the context of the quest for shareholder value, which has accelerated continuously over the last 30 years or so.

In addition to this work intensification, more tasks are being automated. This trend, which we can safely assume will grow, could enable the ‘onshoring’ of certain industrial activities. If a significant part of production costs are accounted for by capital rather than labour, the benefits in offshoring are greatly reduced, particularly with ever accelerated design-manufacture-market cycles (fast fashion being an example). However, various examples show that this has created relatively few jobs so far. In terms of occupational hazards, we can imagine two models. The first sees automation used to drive productivity, with workers forced to adapt to a production model based on machine performance. There could be negative consequences for occupational health and safety. The second would see value added generated by automation, at least in part, socialised, particularly in terms of improving working conditions. The advances in preventing occupational hazards could be spectacular. Breakthroughs in artificial intelligence may also improve the most rewarding jobs by freeing workers from the most mundane tasks (documentation, compiling, and summarising data) so they can spend more time on creative work.

Questions remain over just how far the trend towards intensification and automation can go. Seeking to improve working conditions has benefits, which differ from one sector or occupation to another. And these do not just lie in better prevention of occupational hazards. Numerous studies show that innovation and technological progress cannot be achieved without breaking established rules. For creativity to flourish, regardless of a person’s job or level of responsibility, they must be allowed the time to think about and discuss ideas, to make mistakes and act autonomously. The same goes for initiative, which cannot thrive in a micro-managed environment with overly restrictive procedures. It is therefore a matter of technological and organisational progress by leveraging the skills of individuals. This could result in a two (or several) speed world of work, where there is more room for expression in the most highly skilled occupations. But in terms of occupational health and safety, this is probably the worst-case scenario because it would increase the pressures on the most at-risk occupations.

Lastly, in addition to work intensification and automation, work organisation policies (such as flexibilisation, multiskilling, and outsourcing) strongly emphasise the individualisation and continuous monitoring of tasks, eroding the sense of collective endeavour in companies. As far as occupational health and safety is concerned, this is not a trivial change. It is at a collective level that social support, actual tasks, interactions between workers – everything that makes the occupation and job what it is – are most effectively expressed.

None of these shifts are insignificant, yet they are occurring just as various studies are showing the importance of workers’ ‘social wellbeing’ for the performance of organisations. We should not forget the plight of the self-employed and those working in the platform economy, who are often even more constrained by economic dependence, deadlines, and the need for results.

Five scenarios and their impact on occupational health and safety

This is an edited version of an article originally published in issue 420 of the Futuribles review.